The Cosmic Key to Astrological Prediction applied to the Orlando Murderer’s chart.

To those aspiring to become astrologers or those who are astrologers, here is a look at the accuracy of my predictive technique called The Cosmic Key to Orlando murderer’s chart.
The inner chart is his birth chart and the most striking thing about it is his full moon birth, Moon in Taurus opposed to his Sun and this is in a exact square to Mars, forming a perfect T-Square with this martial planet.
The middle chart is the Progressed chart of which I’m only concerned with the progressed Moon’s position.
The outer chart is the Transit chart of which I’m only concerned with Transit Saturn and the New Moon preceding the event.
To learn more about this accurate technique of prediction go to Amazon Kindle and order The Cosmic Key to Astrological Prediction by yours truly, it’s available on Kindle only.
The Cosmic Key – proven again, as expected. Both, the killer’s  Progressed Moon and New Moon are together opposing his Uranus and Saturn, setting off the Saturn square Jupiter in his birth chart. Mars (martyrs), Jupiter (faith, beliefs). These planets also set off a quincunx aspect to Merury in Scorpio conjunction his natal Sun. Transit Saturn, which takes 28 years to circuit the chart is within 2º orb of his natal Saturn, setting off the square to his natal Jupiter. Saturn is the grim reaper and Jupiter (magnanimous) does it in a magnified way. This square emphasizes the atrocity and coldness (Saturn) of this bloody massacre. He was born with an exact square between his Mars and Sun and this is being set off by the quincunx aspect form Progressed Mooon and also the New Moon. Mar (anger, sex) is afflicting his Sun (spirit) at birth. Uranus (deviation from the social norm, i.e. gay bar) is also receiving an opposition from the Progressed Moon, triggering an unexpected (Uranus action), which occurs in a social gathering (Uranus). When both Saturn and Mars receive afflictions from the three witnesses, it is likely going to happen, if the natal chart promises it – and his does.  In this chart we have so many witnesses to predict this sort of behavior, it seemed inevitable. 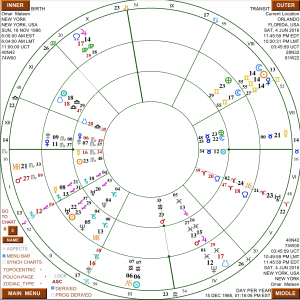