One of the ways we stay on course to achieve atonement (at-one-ment) in our life is by keeping in touch with the essential and elemental truths of our being – a spiritual tune-up, so to speak. We often lose sight of these truths in our day-to-day striving for mastery over circumstances we encounter. Simple truths and actions will provide you with the keys to true mastery and dominion over adversities in your life.

Subscribe
SATURN, CHRISTMAS AND SANTA CLAUS
Christmas is the celebration of the Saturnalia. Saturn was called the grim reaper. The word
Satan is  derived from Saturn. Satan is the Christianized version of Saturn. It’s a clever anagram to hide the mystery from uninitiated.

Santa Claus is derived from  Saint Nicolas (from  Dutch “Sinterklaas” ). Saint Nicolas was an old emiciated thin old man who only became roly-poly fat Santa Clause when he arrived to the U.S.

Saint Nicolas is the reference to Old Nick, described in the dictionary as the name of the devil, or Satan. Saturn was called “Father Time”. Hence, the figure of speech “in the nick of time”.

In the old days, a naughty  child would get coal or rocks in his stockings, whereas a well-behaved child would receive gifts. (Saturn rules over rocks and minerals). Similarly, astrologically, Saturn rewards those that are good and denies good to those that are naughty.  Father Time is Karma. So, what you sow your reap. Saturn was called “the grim reaper”. 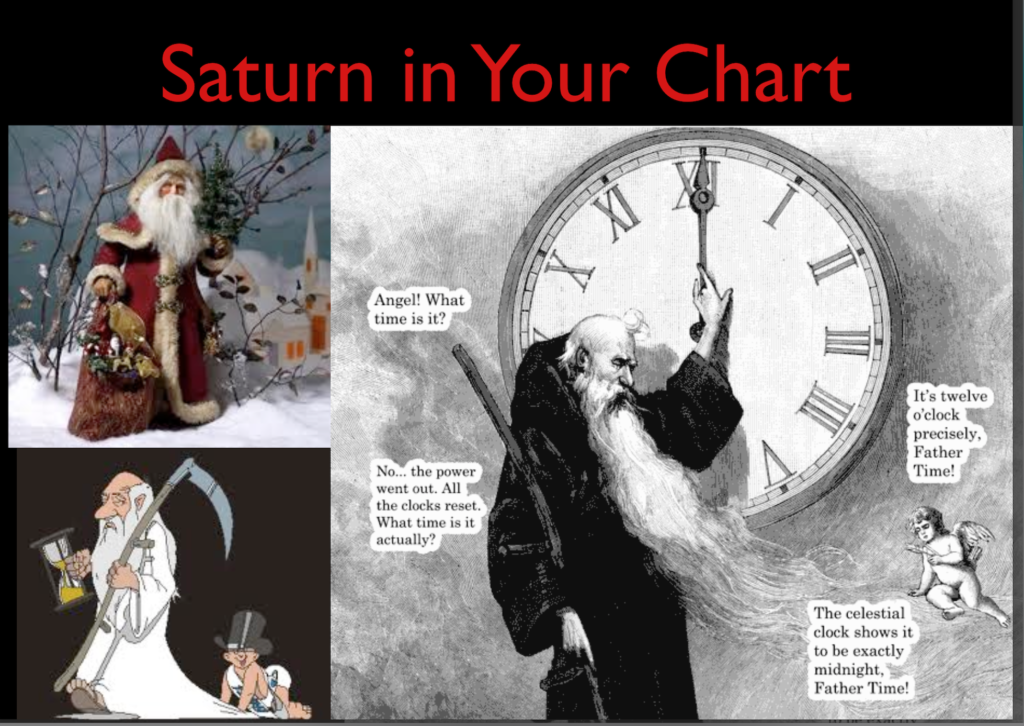 On December 21st, the Sun enters Capricorn, the sign of the Goat, ruled by Saturn.  It then  descends into the lowest declination south of the equator and remains there for three days before it rises again to start its journey north again. It actually rises or ascends again on Midnight of December 24th (Christmas Eve) and we have the r rebirth of the sun. (Or the birth of Christ).  If you draw an astrological chart for the midnight of the 24 of December, (any year)  you will see Virgo (the virgin) rising in the east, overseeing the birth of the Sun. The birth of the Sun happens at the time the Sun is transiting Sagittarius into Capricorn, the sign of the horse and the goat, in other words in the stable, depicting where Christ was born.      (“The Greatest Story Never Told” by Ron Watson; page.71.) 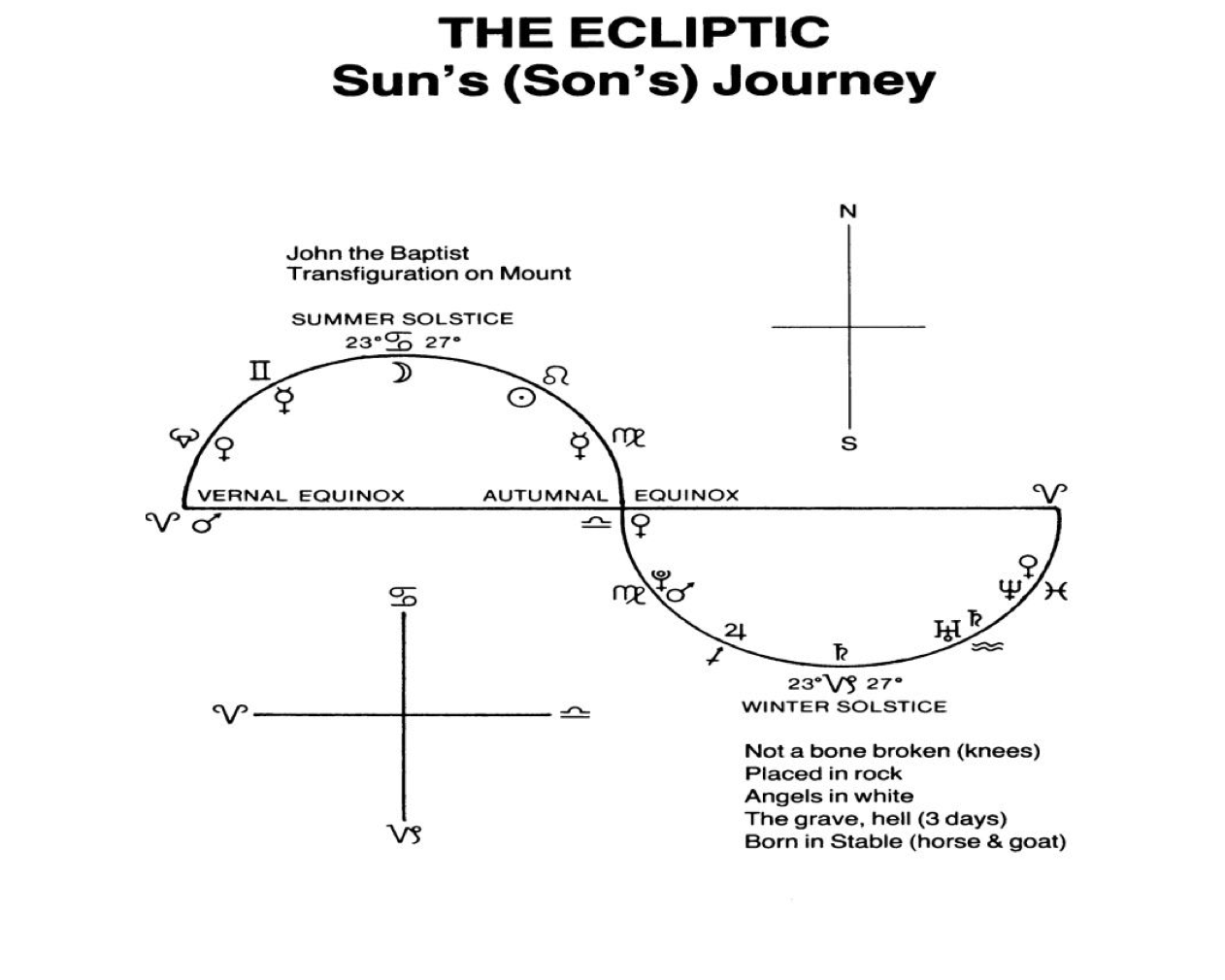 Dealing with “hard” aspects in a chart and understanding the message and lessons to be learned from them.

Start your journey into inner self-discovery, self-healing, and renewed self-expression with a private 90 min astrological consultation by phone, Skype, FaceTime, in-person or sign up for one of our ongoing astrology events. Receive your recorded session by email or mp3 download.  Ron Watson will look into your past, your present and your future.  Natal, progressed and transit interpretations (all included for one price + one year forecast report). Also available – compatibility/relationship counseling.  Ron Watson is an internationally sought after astrologer who has worked as the radio producer and presenter for over 30 years hosting syndicated astrological and metaphysical radio shows on KIEV, KEST, KFOX, and WROL. Ron Watson’s predictions have been featured in newspapers in several countries.

As you proceed through the pages of  The Greatest Story NEVER Told , you find yourself on a journey to an ever-increasing integration of knowledge about this universe and yourself. When understood and applied, you will give have power and dominion over you life and circumstances. Uncover the mysteries of the heavens above and the heaven within, while expanding your knowledge of astrology, mythology and psychology. Master the power and magic of the spoken word, light & subconscious mind. Discover hidden mysteries behind the early Christian teachings suppressed by the Church. Ron’s recently released e-book The Cosmic Key to Astrological Prediction, an in-depth manual for astrologers focusing on his developed technique encompassing three simple calculations going against almost all modern astrological teachings.

A collection of lectures, radio shows, sermons, and discourses on metaphysical, astrological, Biblical topics exploring the power of subconscious mind and the relationship between Man and Universe. “His message changeded my life for good.” John Sfire, CEO, Hartford Financial Corp.
1. The Christmas Present that Lasts  sermon given on Christmas day at the Masonic Temple Church in L.A., CA)
2. The Mystical Marriage
3. Guilt & Forgiveness
4. Astrology, Mythology & the Scriptures
5. 18 “itties” to Perfection
6. The Healing Power of Words

These presentations have inspired untold thousands of individuals to a new level fo understanding and purpose in their lives. Ron brings the knowledge and wisdom of the ancient teaching to a new relevance and meaning and significance in people’s lives.

Jupiter represents the light of the world. It is Zeus,  Jesus - the rebuker of…

Beginner Astrology: A quick look at Saturn and Jupiter

Last night's Yod in a client's chart - urgent hospitalization.     A yod is…

–She took the key, slid it into the lock and turned it. She took a…

How to be an effective astrologer

I’ve often been asked why I don’t use Chiron, or Juno, or any of the…

Let's take a  look at the chart of the mass murderer Stephen Paddock,…

The end is here?

A viewer on Ron Watson Astrology youtube channel asked a question: What is your take…

*In love the paradox occurs that two beings become one, and yet remain two.…

• Astrology reveals a profound psychological understanding into the nature of man and his universe. •  Astrology…

On sun astrology or “blue skying”

Step-by-step chart interpretation of the car accident using the Cosmic Key. Both lights are afflicted.…

An amazing tutorial on Saturn in the Houses (1st through 10th)

Ron Watson is an internationally sought after astrologer, author, and media personality. He hosts syndicated…

The predictive tools. The four elements of Astrology Human temperament: Type A and Type B…

Ron Watson: The souls are hungry for the Truth – not the BS. Be here NOW.

I've learned a lot in my life and I share it with you. And if…

Sticks and stones can break my bones

The Power Of Words By: Evelyn Z. Ross Sticks and stones can break my bones…

The Star of Magi – Live Streaming

The Age of Aquarius Astrologically and Biblically Foretold

The Life Changer: Purifying your Soul

Knowledge that will transform your life, relationships, career and bring joy and peace into your…

How to foresee potential crises in a chart

Thanks for watching. I invite you to check out my new e-book “The Cosmic Key…

How to See Potential Health Problems in a Chart

JOIN US EVERY SATURDAY 7-8PM EST FOR ASTROLOGY LIVE STREAMING WITH RON WATSON. Ron Watson is an…

Live Streaming: Understanding Jupiter and Saturn in your Chart

Saturn represents the ego and the divided state of consciousness, which seeks power and control,…

Jupiter on the Cross – Jesus Crucified

https://www.youtube.com/watch?v=xHX2EtLjrKI   This was a lot of fun. Everyone enjoyed it! There were some astute…

The Cosmic Key to Astrological Prediction applied to the Orlando Murderer's chart. To those aspiring…

the Importance of Having Correct Birth Time

What Makes a Great Astrologist

Excerpt from the book ""The Cosmic Key to Astrological Prediction: It's dead serious" by Ron…

From Prison to Praise

Dear Ron, Thank you so much for accepting our invitation to speak to us.…

PEOPLE THAT ARE UNHAPPY DON'T HAVE GOOD RELATIONSHIP WITH THEMSELVES, i.e, their conscious and subconscious mind.…

The astrological/metaphysical meaning of Christmas. How St. Nicholas relates to Saturn in Astrology and how…

Let's take a look at the mastermind's chart that took away 2,997 lives. Born with moon…

…Take It Away and There’s Death and Decay

In memory of those that lost their innocent lives in Paris last night Nov 13th, 2015.…

Discover "the three witnesses" that can prove to be disastrous it not given attention to.…

What's Saturn afflicting Mercury? Remember the story of Jove? "... and Satan came into the…

Extreme battle between depression and optimism. If you’re looking for astrology videos that will show…

What Set Off the Heart Attack

Death of a Friend

How to predict future events in a chart. Get an inside look into The Cosmic Key ©…

Falling in love could be a challenge. If you've been disappointed a few times around,…

Learn  Natal Chart Interpretation told exclusively by a master astrologer with over 40+ years of experience.…

A Reply to the Student: Transit Saturn Ascending

Hi Julie, Hope this finds you happy and well also. I did reply to…

Reading Charts: Excerpt of a class.

Learn how to tackle a Natal chart. Dos and don'ts. Excerpt from a class.

This is the third class of Beginner Astrology with Ron Watson. Watch how some students…

A question from a student to Ron on Saturn/Jupiter afflictions

Barbara asks:The opposition of Jupiter and Saturn. Both opposites in meaning, and the natal opposition…

Answering a student's question about an aspect in her Natal Chart.

Answering a student's question regarding the sale of her house.

Astrology reveals a profound psychological understanding into the nature of man and his universe.  Astrology provides…

The root meaning of astrological symbols

The circle, the crescent, and the cross represent the spirit, the soul, and the body.

Ron’s Letter to Student: What Makes a Good Astrologer

Dear Andrea,Your brochure is highly professional and well laid out. It grabs one’s interest and…

The Trinity of our Being: the Circle, the Crescent & the Cross

Your eyes are truly the windows to your soul

To argue and dispute with those who think they "know it all," whether it's Christianity…

Fate Vs. Free Will

Sneak Peak into The Star of the Magi

Follow but thy star, Thou canst not miss at last a glorious haven... --Dante Sneak…

Transit Saturn - progressed Moon are constantly opposing each other, setting up a cross every…

Metaphysical and astrological discussions. Call-in astrology readings. “Here is Ron Watson, your guide to the…

Tammy is asking Ron a set of question related to interpreting astrological charts. How does…

Astrology & Christianity they are inseparable dispite the Churches attempts to repress it. How Saturn…

For more Astrological and Metaphysical discussions visit our BLOG PAGE.